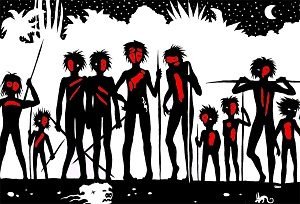 The thesis statement is the last sentence of the introduction which contains the main idea of the essay which will be developed in the body with the use of supportive arguments. A proper thesis has to be accurate and to the point in order to make it clear for the readers what will be discussed. Thesis for Lord of the Flies can have different forms as the spectrum of problems mentioned in the novel is manifold. The essential problem of the novel is dedicated to the controversial question about the two sides of human nature: wild human instincts and the necessity to stay humane in any extreme situation. However, the thesis for this essay is going to describe the second idea which is represented by the protagonist named Ralph.

“Lord of the Flies” by William Golding tells the story about four underaged Ralph, Jack, Simon, and Piggy, who are left on the deserted island alone. Ralph becomes a leader who takes care of this newly created civilization. As two opposite ideas are presented in the novel, the cruel side of human nature and the necessity to stay moral in every situation, Ralph is a protagonist who represents the second idea that people have to be humane even in the extremely tough situations.
Ralph is a character with the static behavior because he stays loyal to his point of view on morality until the end. In the beginning, Ralph represents an adult who thinks about the survival and other things which are necessary for the life, much as hunting, building huts and fire making. He thinks that a real person cannot kill other living beings, especially humans, under no circumstances. He does not sacrifice his ideals and betrays himself even when he needs to save his life from Jack and his cruel tribe.

As it is obvious, he is involved in the novel to emphasize the idea of the importance to save morality and such values as love, friendship, kindness, and support, as the opposition to Jack who represents the cruelty and animal instincts. As there is no motivation for Ralph to change during the novel, he does not betray himself. To add more, the time spent on the island is not enough for such a strong personality to change his mind to the opposite point of view.

To sum up, it is significant to state that Ralph is a protagonist of The Lord of the Flies, a representative of common sense and humanity who fights against the other protagonist, Jack, who lives following animal instincts. All his words, intentions, and actions prove that he is the type of person who cannot behave like a monster even when experiencing an extremely complicated situation. Therefore, Ralph does not betray his values and does not agree to live with the wild tribe of Jack. He is ready to stay alone and fight against the others if only it helps to be himself and not to hurt anyone.